I bought this Mcufriend touch screen. It’s the unbranded version of this one sold by Adafruit. 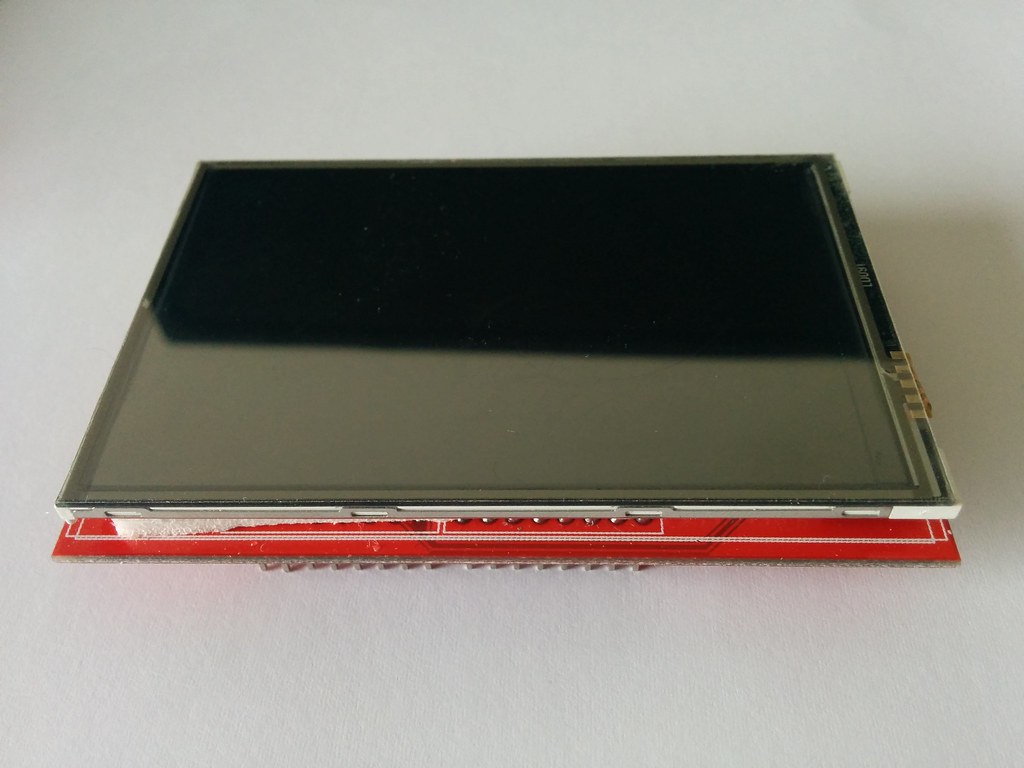 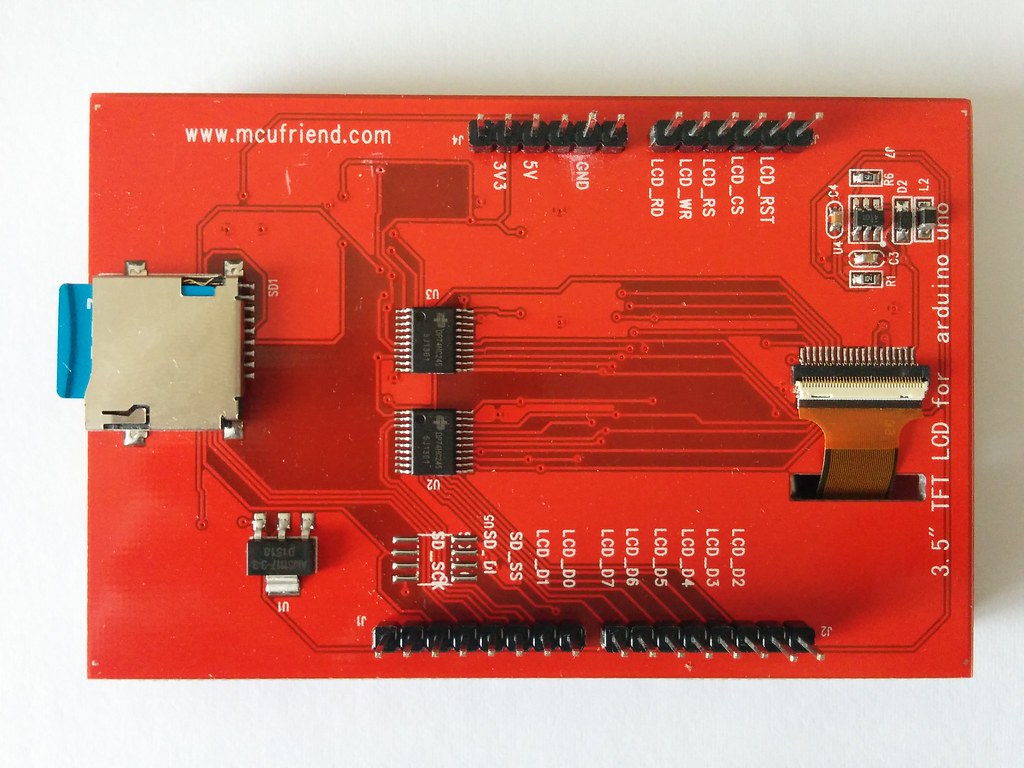 I got it for $10 compared to Adafruit’s price of $40. I came across the screen through this awesome video by Charles Cole where he walks through his FPGA implementation of a Z-Machine. I also bought the Altera mini dev board he recommends ($20 which is a steal) but that’s another post.

Part 1) Getting the screen to work

Looking back, I see why someone would opt to shell out the extra cash for Adafruit’s (essentially) plug and play touchscreen. On the otherhand, I learned quite a bit about how the LCD works which will be useful when attempting to translate the relevant driver code into the Hack HL language.

Here’s a list of sources I used to get the screen working:

The screen is designed as an Arduino shield, so connecting the two is as simple as plugging them together. 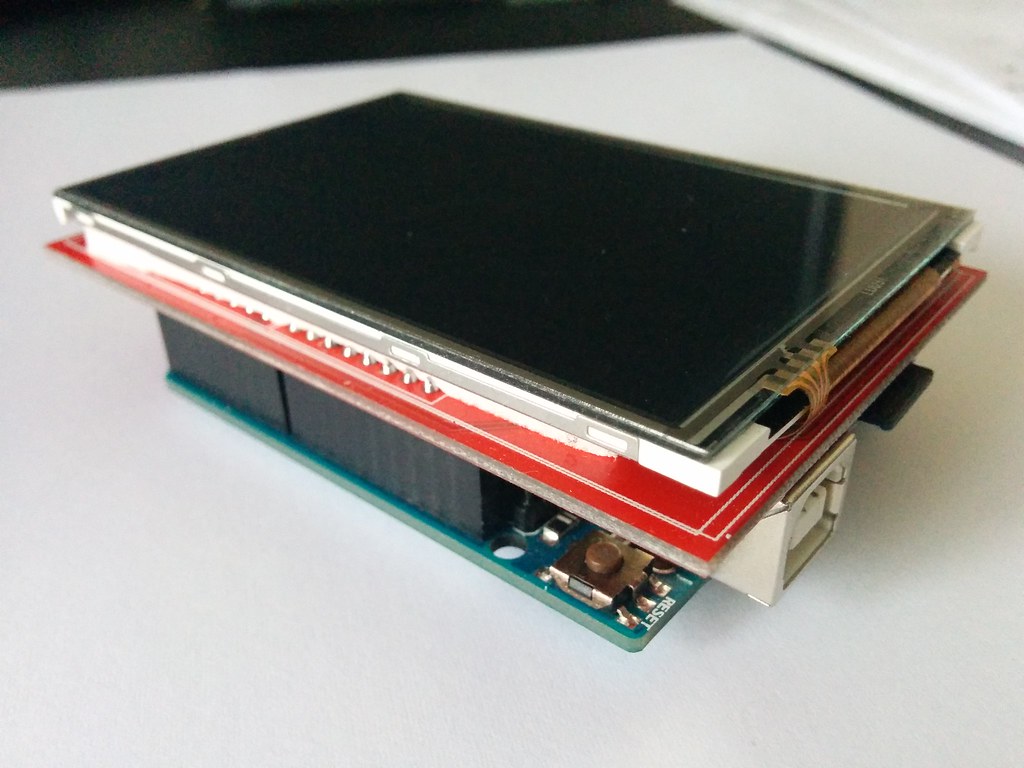 I used the following libraries:

After plugging in the LCD, I uploaded the graphicstest sketch (included in the Adafruit TFT LCD library) onto the Arduino. The guide shows how the graphicstest should look when working correctly. All I got was a blank screen. Here are the various changes I made to get the Arduino communicating with the LCD:

In Adafruit_TFTLCD.h, left this line commented out. Despite the Mcufriend LCD being a shield, it only worked with the breakout board pinout.

Additionaly I changed some lines of code in the Adafruit_TFTLCD.cpp file as follows:

2) Forced the function Adafruit_TFTLCD::readID(void) to return a driver id of 0x9341,

The Mcufriend driver reads as “Unkown LCD driver chip”… I tested the four drivers (932X, 7575, 9341, HX8357D) already implemented by Adafruit in the code and the 9341 worked. If none had worked, I would have found myself in a sticky situation. (I would have to either identify the driver installed on the LCD, then find and read the related docs (look at the size of these docs!), so that I can write the magic code needed to interface with it. Or fork up the cash for Adafruit’s LCD shield).

The 9341 driver worked, but the colors were inverted. For example black appears as white. Blue as magenta. I could technically write all future programs with this in mind, for example type ‘white’ when I want something to appear ‘black’ but that would be a PITA. I could alternatively read the driver manual and try to figure out why the colors are inverted and change the magic code accordingly… which would also be a (grueling) PITA. I instead opted to write some code that would invert the color right before it was sent to the LCD.

I wanted to have minimal impact on the program speed, so I implemented the subtraction using bitwise operators. The truth table for the subtraction matched that of a XOR gate

So the code to invert a color was simply,

The snippet was applied to the flood, drawPixel, and pushColors functions.

After the above changes, the screen finally ran the graphicstest demo properly. But something was still not quite right. It was way too noisy. 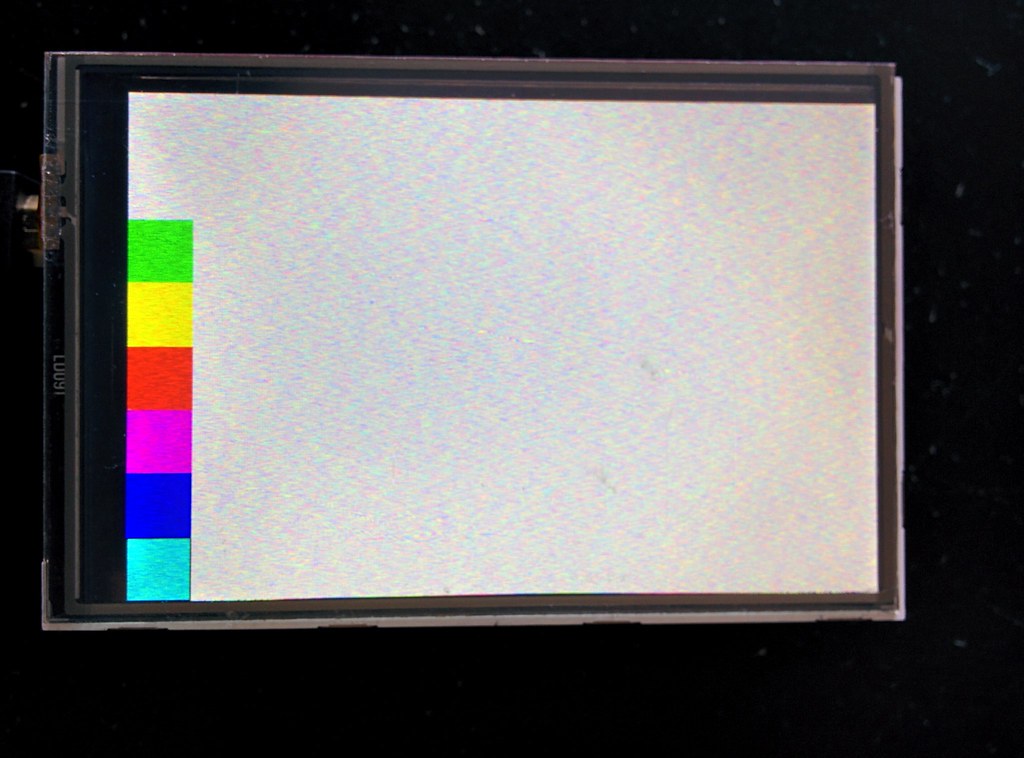 At first I though it was a software problem. But much googlefu later I found nothing. The following day I looked more closely at the noise. The more I looked at the screen the less digital it seemed. Depending on which angle you looked at the screen, the noise pattern changed and didn’t seem to follow the grid layout of the pixels. Given how relatively cheap the screen was to buy, I decided to peel off the touch screen layer that sits atop the LCD to verify whether it was the code or something physical causing the fuzziness. 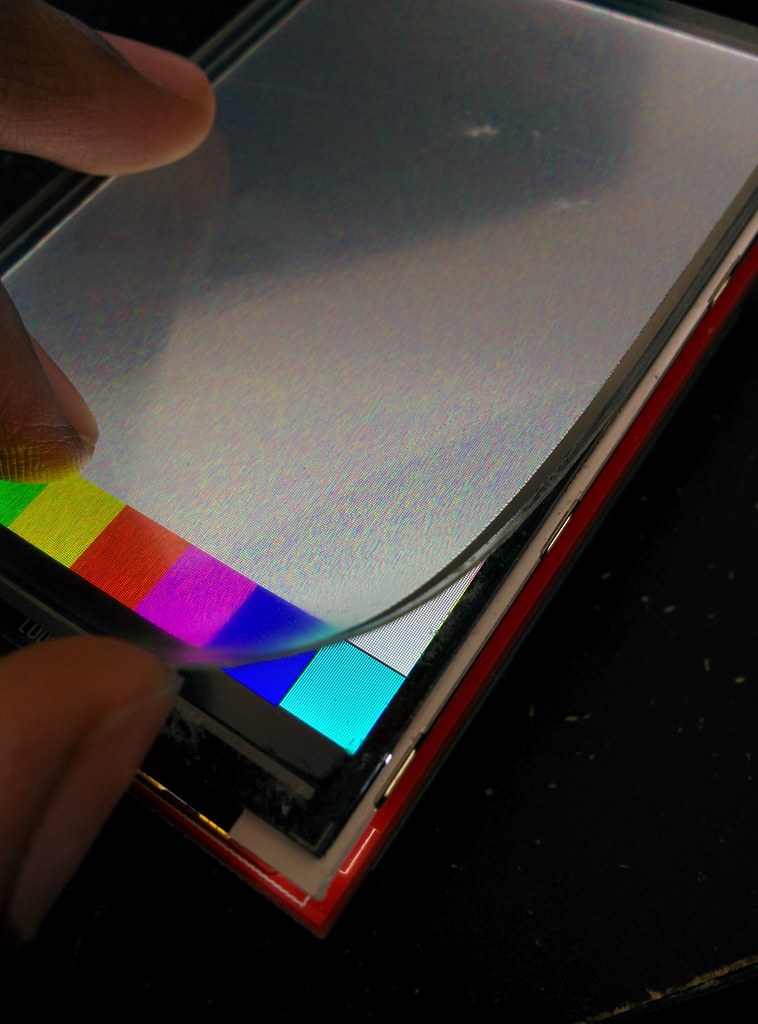 Frosty. Not dirty per se, but also not optically clear. 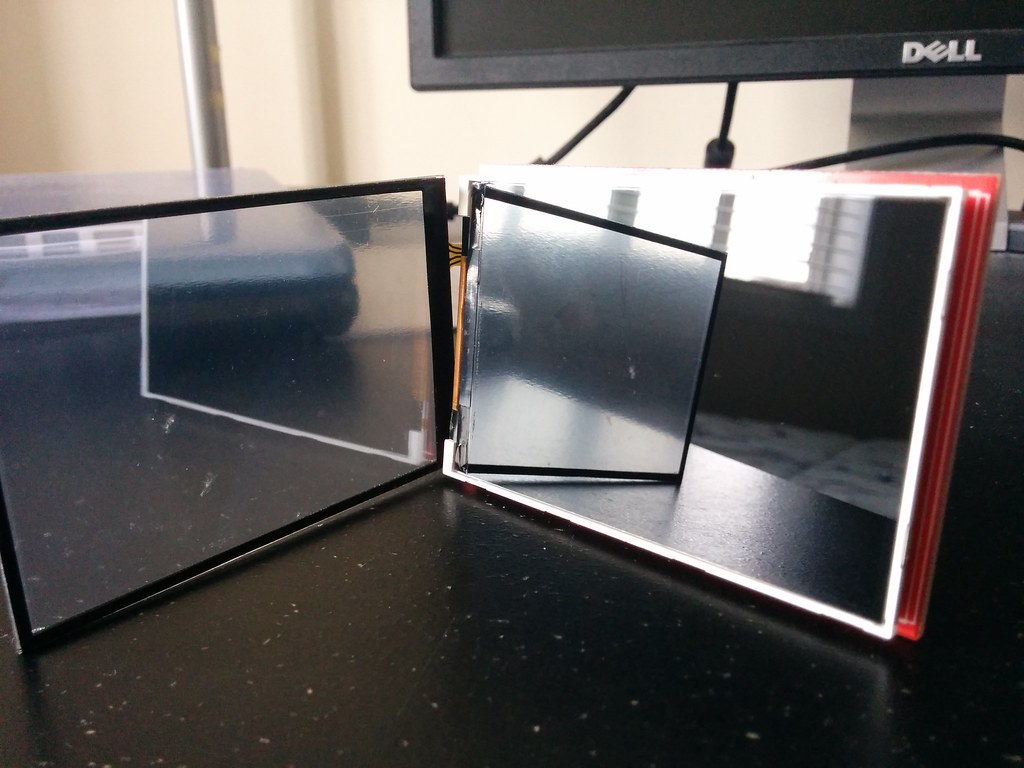 At this point I was pretty bored and considered just using the screen without the touch screen layer. Guess this is what you get for $10, some cheap thing tacked on to claim ‘touch’ support.

But then, wait. It can’t be… Are you serious? 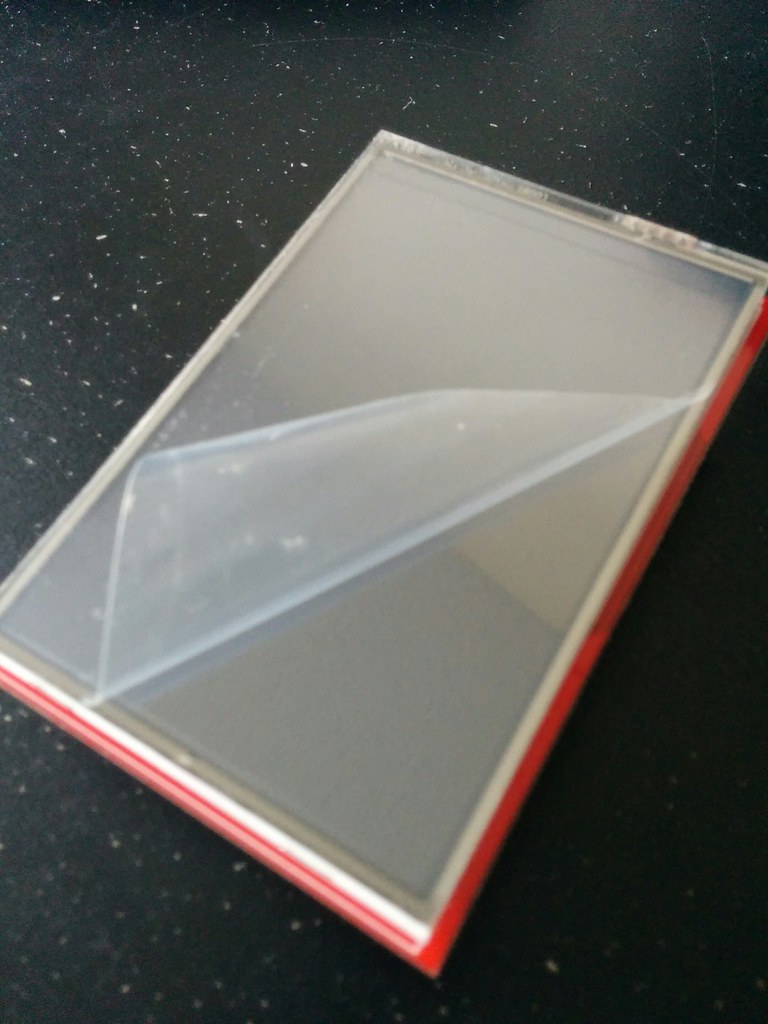 The touch screen had one of those ultra thin anti-smudge/protective film thingies… So thin that I missed it the several times I was looking for it. Did I mention facepalm? With the film removed, the screen was crystal clear.

Setting up the touch screen

To get the touch screen to work was relatively straightforward.

1) I got the right output pins from Joao Lopes and changed the code accordingly.

2) And changed the mapping code

All the other defaults worked. I will probably move these settings to a shared config file so that they don’t have to be defined repeatedly by each program that uses the touch screen.

So that was part 1 of the screen gameplan. Stay tuned for parts 2 and 3. I anticipate part 2 (code translation from C++ to Hack HL) to be rather painful, and part 3 (connecting to the Hack hardware) a relative walk in the park. We shall see.